The most common form of corrosion metals undergo is reacting with oxygen and water (moisture) present in the air.  This reaction is often referred to as oxidation of the metal. Iron and steel are made from iron ore which exists in the earth’s crust as an oxide of iron.  In this natural state, iron ore or iron oxide is stable and has minimal natural tendency to change or to react with other materials. The steel making process uses large amounts of energy to convert the iron oxide in the ore to elemental iron that is naturally unstable.  Given the right conditions, the iron will tend to revert back to the more stable compound of iron oxide; i.e. it will rust.

Differences in electrical potential on the steel surface are caused by non-uniformity of the surface composition. Small electrolytic cells are formed comprising anodes and cathodes. A diagram of one such cell is shown below. 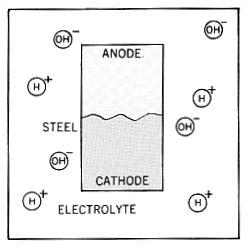 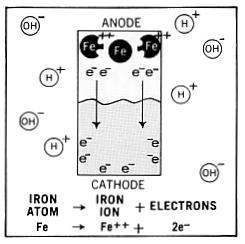 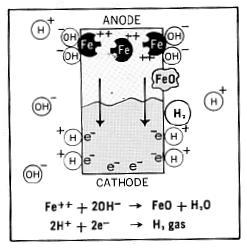 Under suitable conditions corrosion occurs at the rate of billions of complete reactions every second and soon results in a layer of rust appearing over the surface of the anode area.

The anode and cathode areas on a piece of steel are actually microscopic. When greatly magnified the surface might appear as the mosaic of anodes and cathodes visualised here, all electrically connected by the underlying steel. Corrosion occurs in the anode areas.

As anode areas corrode new material of different composition and structure is exposed. This results in changes in electrical potentials, causing anodes and cathodes to exchange roles, though not all at once, and areas previously not corroded are now attacked. These processes may continue until the steel is entirely consumed. 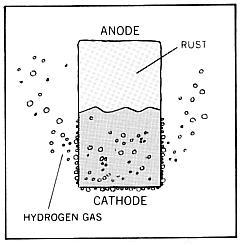 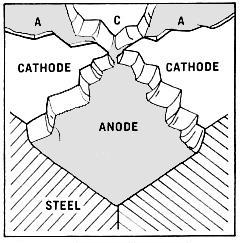 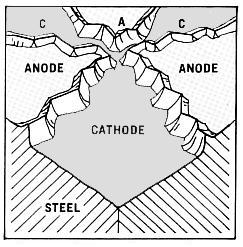 A protective patina is generally made up of insoluble zinc oxides, hydroxides and carbonates, but can contain other basic zinc salts depending on the environment. Once the patina stabilises, it reduces the exposure of the galvanized coating to the environment, thus considerably slowing the corrosion process. This patina regenerates itself after damage by slowly consuming the zinc in the coating. 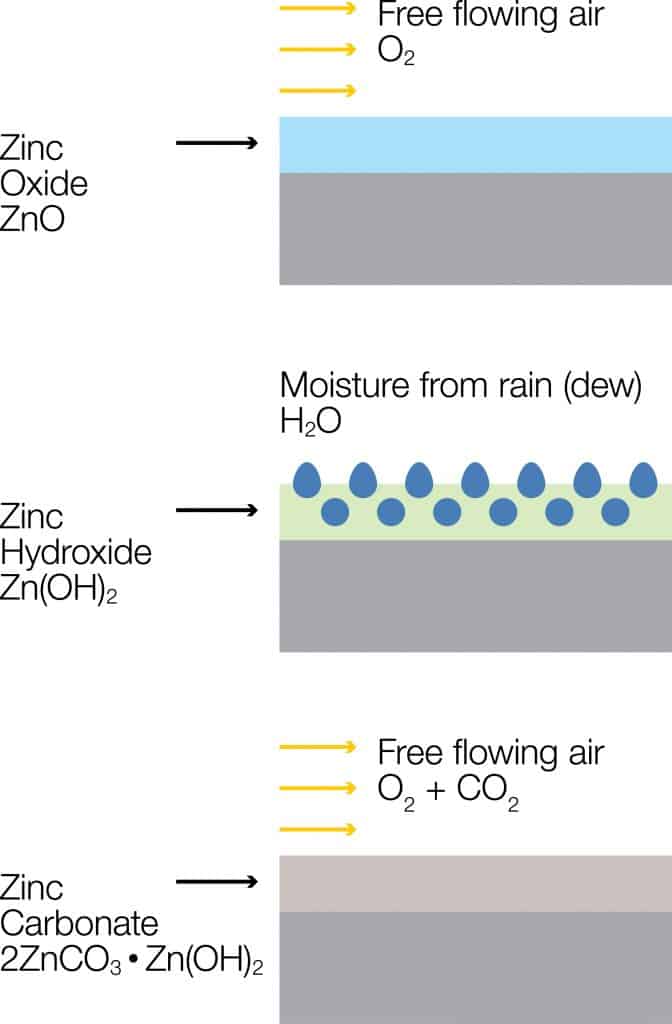 The zinc patina begins its development with exposure to oxygen in the atmosphere, forming a layer of zinc oxide on the surface. Moisture from rain or humid air reacts with the zinc oxide to form zinc hydroxide which then reacts with carbon dioxide present in the air to form the tightly adherent, insoluble zinc patina.

The barrier protection qualities of a galvanized coating are also enhanced by the fact that it is immune to ultraviolet radiation and thus will not degrade on exposure to Australia’s high UV index levels.  Most other corrosion protection coatings will degrade on exposure to solar radiation.  This is usually one of the key limiting factors to the performance of such coatings.

The problem with conventional barrier protection, such as painting, is that it will not prevent corrosion if the base steel is exposed due to mechanical impact damage or abrasion. In fact, some barrier protection can allow corrosion to proceed undetected in the form of under film corrosion.  In the event of severe mechanical damage and exposure of the base steel to the environment, galvanizing also provides cathodic protection. The galvanizing performs in a similar way to other sacrificial protection systems, except in this case the sacrificial anode is distributed over the article to be protected and electrical continuity is assured. The cathodic protection characteristics of galvanizing ensure that mechanical damage does not result in concealed under-film corrosion and potential catastrophic failure prevalent in some other protective coatings.

Where continuity of the galvanized coating is broken by cut edges, drilled holes or surface damage, small areas of exposed steel are protected from corrosion cathodically by the surrounding coating. No touch up is necessary, and cathodic or sacrificial protection continues for many years. In service, zinc corrosion product tends to build up in coating discontinuities, slowing the rate at which the surrounding coating is consumed in protecting a damaged area.

In the presence of an electrolyte, the anodic zinc coating of a galvanized article corrodes preferentially to the cathodic steel base, preventing corrosion of small areas which may be exposed. The cathodic or sacrificial protection continues for as long as some of the galvanized coating remains.  A simple description of the phenomenon of corrosion of steel is given here as background for the explanation of cathodic protection.

The diagram below shows a series of metals arranged in order of electrochemical activity in a sea water electrolyte. Metals on the left provide cathodic or sacrificial protection to the metals to the right of them.  Zinc therefore protects steel.

Galvanic series of metals in a sea water electrolyte 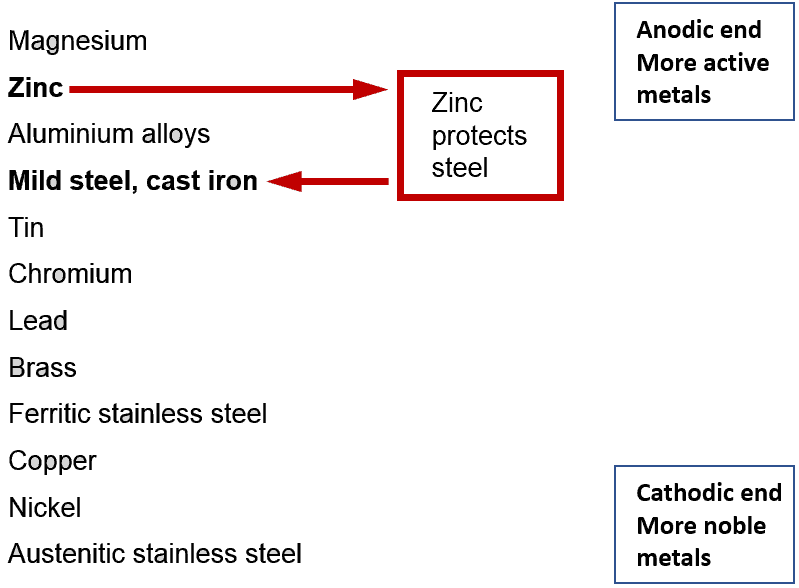 The diagram indicates that magnesium and aluminium should also protect steel, however they are generally not used for this purpose. In most normal applications magnesium is highly reactive and is too rapidly consumed to provide long term protection, while aluminium forms a resistant oxide coating and its effectiveness in providing cathodic protection is limited.

THE MECHANISM OF CATHODIC PROTECTION

When zinc and steel are in contact in an electrolyte, differences in electrical potential develop and an electrolytic (galvanic) cell is formed. Zinc is more electrochemically active than steel, as shown in the galvanic series (see diagram) above and therefore becomes the anode for the steel, instead of small anodic and cathodic areas forming on the steel surface. 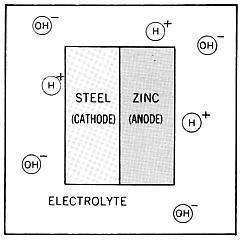 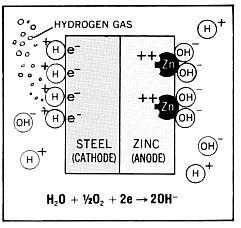 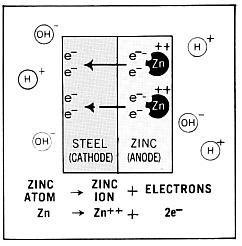 Due to the differences in electrical potential between the two different metals, negatively charged electrons flow from the zinc (anode) to the steel (cathode) and zinc atoms are converted to positively charged zinc ions. 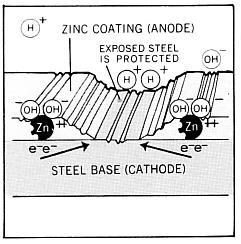 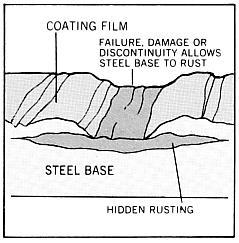 When discontinuity or damage in the zinc coating exposes the underlying steel, the cathodic protection the zinc provides for the steel comes into action and ensures that the exposed steel does not corrode.

Most organic coatings and paint films depend on their barrier or sealing ability and in some cases anti-corrosive inhibitive pigments to protect steel from corrosion. They offer little or no protection to bare steel exposed by failure, damage or discontinuity in the coating film, which results in corrosion of the steel starting at the exposed area and will generally spread beneath the coating.