The excellent corrosion resistance of galvanized coatings in the atmosphere, soil, concrete and in most natural waters is due to the formation of a protective layer or patina which consists of insoluble zinc oxides, hydroxides, carbonates and basic zinc salts, depending on the environment. When the protective patina has stabilized, reaction between the coating and its environment proceeds at a greatly reduced rate resulting in long coating life.

CORROSIVITY IN THE AUSTRALIAN ATMOSPHERE

Two key Australian Standards, AS 4312 and AS/NZS 2312.2, provide considerable information on the corrosion rate of steel and zinc respectively under various conditions of atmospheric service. In addition, over the last few decades the CSIRO and others have carried out extensive mapping to establish the corrosivity of the Australian climate. AS 4312 is the best source of Australian data for corrosivity of steel in the local environment.

It is important to note the corrosion rate estimates for steel and zinc in the various Standards are consistent and are interchangeable with the International Standards ISO 9223 and ISO 14713.1 for service life estimate purposes.

The GAA has developed a simple online interpolation tool using the information from AS/NZS 2312.2 and AS 4312 to allow designers to estimate the durability of hot dip galvanizing in various atmospheric conditions which can be accessed here.

The appraisement of the protective life of a galvanized coating in a location must consider factors such as climatic conditions, the presence in the atmosphere of contaminants in the atmosphere introduced by urban or industrial activity, and chlorides in the air due to proximity to the sea. For more information on how these factors affect the durability of the hot dip galvanized coating, you can download the Guide to the Service Life of Galvanizing, from the guide section of our Technical Publications page.

Environments which appear similar often produce considerable differences in corrosivity due to relativity minor variations in conditions, such as prevailing winds, proximity to corrosive effluents and general atmospheric conditions.

In warm dry atmospheres zinc is very stable. The patina formed during initial exposure remains intact preventing further reaction between the galvanized coating and the air, and protection continues indefinitely.

In the presence of atmospheric moisture, the zinc oxide film is quickly converted to zinc hydroxide, and carbon dioxide present in the air reacts to form basic zinc carbonates. These stable inert compounds resist further action and ensure long life for the protective galvanized coating.

In rural areas the life of galvanized coatings is often over 100 years, but may be reduced due to micro-environments created by the effects of aerial spraying of fertilizers or insecticides. In dry form most fertilizers and insecticides are harmless to zinc coatings but when wetted by rainwater or irrigation spray water, aggressive solutions can be formed which will attack galvanized coatings until washed off by further wetting.

Near the sea coast the rate of corrosion is increased by the presence of soluble chlorides in the atmosphere. The performance of galvanized coatings relative to other protective systems is outstanding, particularly when used as part of a duplex system consisting of paint over galvanizing. 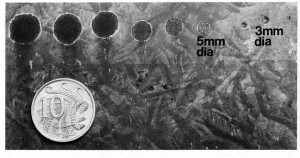 Galvanized steel test piece has had circular areas of the coating removed before exposure in a severe industrial environment. Sacrificial protection provided by the surrounding zinc coating has prevented corrosion of circles up to 3mm diameter and minimised corrosion of 5mm circle. Larger circles also exhibit corrosion-free annular areas adjacent to the surrounding coating.

Note: AS 4312 includes maps showing estimates of corrosivity zones for several major cities of Australia. In addition, detailed corrosivity maps for South Australia (prepared by the SA government) are available at SA Government Corrosion Environment Maps. Other states may have similar resources.

Indeed, one of the great advantages of hot dip galvanizing is the predictability of the thickness of the zinc for any given steel thickness. This is particularly important for sharp edges and complex shapes, where conventional paints don’t always cover well.

Continuous galvanizing and electro-galvanizing processes do not follow this relationship, because the processes deliberately restrict the galvanizing thickness to allow the steel to retain ductility for further manufacturing.

There are many different hot dip galvanized coatings available in Australia. The commonly available products and their relative performance in various environments are shown. It is important to recognise that the durability of all galvanized coatings is generally directly proportional to the coating thickness, which is defined in each manufacturing Standard.

After-fabrication hot dip galvanizing manufactured to AS/NZS 4680 produces the maximum thickness possible relative to steel thickness, which means it will always provide a longer life to first maintenance than any other hot dip galvanized coating. This contrasts with continuously or specialised coated products, which are produced by different processes. For continuous coated products, the zinc thickness is accurately controlled, regardless of steel thickness, so that it remains smooth and ductile to allow for later cold forming and for varying manufacturing and end usage and therefore the corrosion protection is necessarily less because of the lower zinc thickness.

The estimated zinc corrosion rates can also be displayed graphically, allowing for simple calculations for Life to First Maintenance based on measured coating thicknesses. 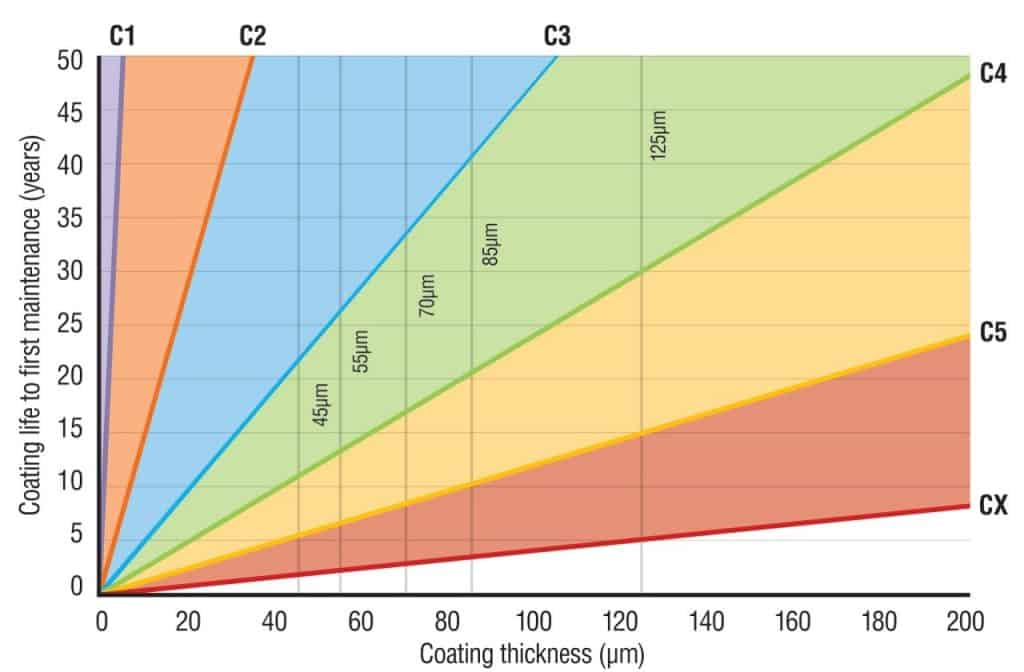 To use the chart, let’s say you have a hot dip galvanized structure using steel thicker than 6 mm and located in a C4 environment. According to AS/NZS 4680, a piece of steel greater than 6 mm thick must have a minimum average of 85 µm zinc. If you follow the 85 µm marker on the chart up to the green C4 line and across to the “coating life to first maintenance” axis, you’ll see you have, in the worst case, approximately 20 years until first maintenance (or 5% rust of the substrate steel). In other words, 95% of your coating is still intact, so the structural integrity is not threatened. In the best case, the durability of the coating will be up to 40 years (following the line up to next zone).

Hot dip galvanized coatings will withstand continuous exposure to temperatures of approximately 200ºC and occasional excursions up to 275ºC without any effect on the coating. Above these temperatures there is a tendency for the outer zinc layer to separate, but the alloy-layer, which usually comprises much of the coating, remains. Adequate protection may often be provided up to the melting point of the alloy layer (around 650ºC).

General. The corrosion rate of zinc under immersed conditions can be high in acidic solutions below pH 6 and alkaline solutions above pH 12.5. Between these limits the rate of corrosion is much lower.

In mains supply water of pH 6 to pH 8, calcium carbonate is normally present and this is precipitated onto the galvanized coating as an adherent calcium carbonate scale, together with zinc corrosion products, forming an impervious layer. When sufficiently dense, this layer virtually stops corrosion of the coating, resulting in very long life in many domestic water systems.

Other factors may interfere with this scale deposition. If the water has a high concentration of uncombined carbon dioxide, the protective scale is not formed and full protection never develops. The characteristics of the water supply should be taken into account in the design of domestic water systems. The presence of even small quantities of dissolved copper of the order of 0.1 parts per million in the water may cause corrosion by rapid pitting as discussed under galvanic corrosion.

Pure water. When newly galvanized articles are immersed in pure water, such as rainwater, there are no dissolved salts present to form the film of insoluble compounds which normally protects the coating from further action. Where practical this condition can be corrected by the addition to the water of controlled amounts of salts during initial immersion. Most natural waters contain sufficient dissolved salts to prevent initial attack and galvanized tanks and equipment give excellent service.

Effect of water temperature. In cold water of normal composition galvanized coatings are most effective and the rate of consumption of the coating is very low. This has resulted in almost universal use of galvanized steel for tanks for water storage and transport.

At about 60ºC to 65ºC the rate of corrosion of galvanized coatings increases and continued corrosion resistance depends on early formation of adequate non-flaking scale. Hard water in hot water systems will deposit a scale of calcium and magnesium carbonates on the galvanized surface, nullifying the temperature effect. Soft water may not deposit a protective scale. In such cases galvanized coatings are unsuitable for hot water systems.

The addition to the galvanized coating of a suitable paint system is recommended in areas of severe sea water exposure, particularly in the splash zone. Such duplex systems provide the best available protective coating for steel in sea water. Suitable paint coating systems are listed in Paint Systems. 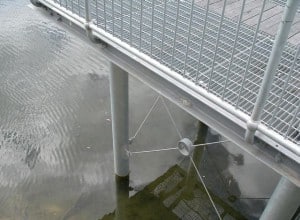 The corrosion behaviour of buried galvanized steel varies greatly with the type of soil. Knowledge of local conditions is therefore essential in estimating the life of galvanized steel. Generally galvanized steel lasts considerably longer than uncoated or painted steels but performance is best in alkaline and oxidizing soils, where 600g/m² galvanized coating will give an additional life of about 10 years to steel pipes. Highly reducing soil is most aggressive and may consume zinc coatings at more than 13μm per year. AS/NZS 2041.1 provides detailed design advice for buried culverts that is generally useful for all buried galvanized structures.

The life of galvanized steel underground is extended by the use of paint coatings, bituminous compounds, tape wraps or concrete encasement.

For more information about the performance of galvanizing in different environments, download the Guide to the Service Life of Galvanizing from the guide section of our Technical Publications page.